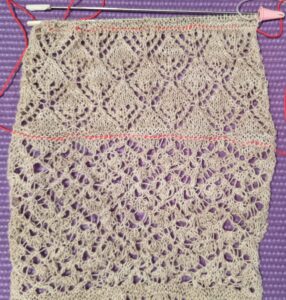 The next two patterns in the sampler are done, and I definitely like one more than the other – you can probably guess which looking at the photo (eleven is on the bottom, twelve above it).

Pattern eleven was, frankly, an absolute pain to knit. I’m not entirely sure I ever got the combination of cast-offs, yo twice, and then k1,p1,k1 in the double yo correct and I had more issues being off a stitch in the repeats with this pattern than any other in the sampler so far. The end result is very open and the heavier, filled-in knit parts don’t stand out the way I wish they did.

In contrast, pattern twelve was both easier and turned out nicer. I’m a big fan of the patterns that have “Even R: P all sts” in the header – not just because of the easy rows that require less attention, but also because it makes it easier to recover from slight issues in the previous row.

I meant to do an overall photo of the whole sampler after pattern ten, but I forgot, so here’s how it’s looking after 12 of 74 are done. Nothing is blocked, but just laid out as is it’s currently just under 45 inches long. At this pace, the end result should be 7 to 8 yards long! 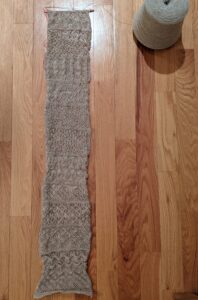