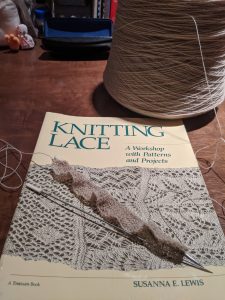 Having just finished a pair of socks (except weaving in the ends, goodness how I hate weaving in ends), the current “stay at home” order has found me without any sort of craft project in progress, which clearly had to be remedied. So, after organizing my supplies, I decided to make another attempt at a project I tried to tackle a few years ago but got derailed on: knitting a lace sampler.

Specifically, I want to make the 91-pattern lace sampler from Knitting Pace: A Workshop with Patterns and Projects by Susanna Lewis. The sampler recreates a early/mid-19th century lace sampler from Germany or Austria. The original sampler is in The Brooklyn Museum, but the author undertook the project of inspecting it and recreating all of its patterns.

So far, I’ve just set the base for the sampler, knitting 12 rows in garter stitch with 65 stitches per row to start things off. Here I’m also deviating – the original sampler had stockinette as the base and reverse stockinette between patterns. But I’m planning on using garter as my boundaries because my stockinette tends to curl a lot and it will better match the garter stitch that will surround the lace patterns on the side for those with repeats that don’t divide evenly into 65 stitches.

I’m intended to update here each time I get a pattern done. There’s no guidance of how many repeats of a lace pattern to do within each section so I’ll be eyeballing it from pictures of the original. Pattern 1 looks pretty simple – a diagonal eyelet – so hopefully I’ll have more to share soon.

One thought on “Knit Lace Sampler: A New Project”